A couple days ago, Steve Jobs announced the iPad 2. I know, because I was sitting on set, reading all about it on my embarrassingly antiquated iPad 1.

First, the good news: The iPad 2 proves that not all sequels suck. In fact, it joins an elite club of follow-ups that surpass their predecessors (I’m looking at you, Troll 2). That said, there are some pretty unfortunate missteps. Here we go! 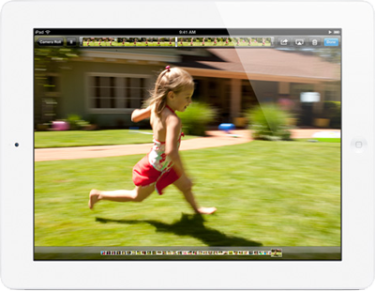 The new iPad includes a rear-facing HD video camera, and a forward-facing VGA camera, similar to the setup in the iPhone 4. Naturally, the HD camera gives mobile filmmakers a new way to capture their footage, but it does much more than that. In the same way the iPhone’s camera allowed the development of incredible apps like Storyboard Composer and Artemis, the new iPad cameras are sure to spark some creative genius. In the words of Twitter tweeter @davepowersNYC, “2cameras & built in iMovie, really curious to see how casting evolves.” I couldn’t have said it better myself.

Naturally, both cameras will come in handy while doing FaceTime conferences from set, but that’s nothing new since we’ve been able to do that with our iPhones for some time now.

What in the hell was Apple thinking when it designed the Smart Cover? Seriously! Maybe it’s just me, but this is the ugliest thing I’ve ever seen. Forget for a moment that this brilliant innovation doesn’t in any way protect the rear of the device. Let’s just focus on the fact that the new cover bears a striking resemblance to a WeeWee Pad.

I suppose I shouldn’t be surprised. I’ve hated every case Apple has designed for mobile devices ever since I owned a Newton.  I know this isn’t a filmmaker issue. But, then again, I like to think filmmakers have taste.

With the addition of a $39 cable, the iPad 2 will be able to send mirrored video out to any HDMI display. That means anything you see on the iPad screen can also be seen (or recorded) on any HDMI device. So why is this good for filmmakers? Many reasons. 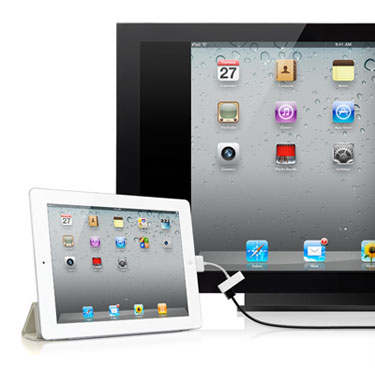 First, it means you have the option of showing your movies on a larger display (if one is available). I’ve been in pitch meetings where I’ve shown video on my iPad, even though there’s a large HD television in the room. By keeping Apple’s new HDMI cable in my pocket, I now have the option of utilizing such larger screens (which also means better speakers).

Next, it means you can turn your iPad into a mobile test pattern generator. Just load up your photo album with various bars and charts, and then attach it to the monitor you want to calibrate. Of course, this is assuming that the iPad 2’s video output isn’t discolored or inaccurate in some way. We should know that soon.

Along the same lines, you could even use your iPad 2 as a source for graphics and titles during a live, multi-camera shoot. For instance, if you’re switching live video, and your switcher has an available HDMI input, you could use the iPad 2 as a title generator. Just load up your favorite graphics app, or create your titles ahead of time. Some apps even allow for very nice title animation. Hell, even Keynote can generate smoother animations then those I’ve seen while attending events with live switched video. However, it’s far from a perfect solution since the iPad’s screen is not 16×9, and neither is the mirrored video. That means the iPad’s video output will NOT fill the HD screen. So, I guess we can call that a MINI FAIL.

There were many rumors flying around, suggesting that the new iPad would have an improved screen, similar to the iPhone’s retina display. Sadly, that didn’t happen. The new iPad has the exact same screen as the previous iPad. Yes, it’s a good screen, but after reading screenplays on my iPad for hours on end, my eyes can get a little strained. I tend to think a display with improved resolution might help in that regard. Or I could just read a script on paper, but where’s the fun in that?

An improved screen would have been nice for video playback, and interface clarity as well. 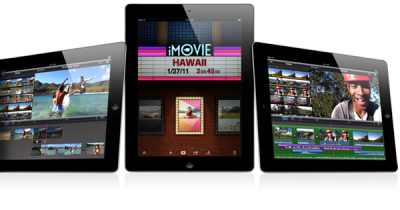 Holy crap, does this look good! I’ve been using iMovie on my iPhone to cut many of the videos I post here on the site, as well as videos I use to communicate ideas to producers when I’m directing. However, it’s not always easy editing video on the iPhone’s small screen. Now, Apple is preparing to release a significant upgrade to iMovie, bringing it to the iPad. It comes with precision editing, multi-track audio, additional themes, and a wide variety of export options. It’s a universal app, so these improvements should also be available on the iPhone 4.

If you already own an iPad, and you don’t plan on upgrading to an iPad 2, you should forget about using iMovie. Apple has announced that this new version will only be compatible with the iPad 2, iPhone 4, and the fourth generation of the iPod Touch. I don’t know about you, but that really pissed me off. I’m hopeful that the app still works on my iPad, and just lacks the ability to record video. But knowing Apple, that’s unlikely to be the case. WEAK!

You know what? Scratch that. Thunderbolt on an iPad is like chrome siding on a banana. Sure, it looks good, but it doesn’t taste any better. Thunderbolt will matter when the iPad’s storage capacity increases, processor power quadruples, and Apple releases Final Cut Pro Mobile.

So, what did I miss? How will the iPad 2 improve or bone your workflow? Let me know in the comments.

I’m on the Mobile Creator Podcast!

I had the honor and pleasure of being interviewed on the Mobile Creator Podcast earlier this week! It was a genuine blast