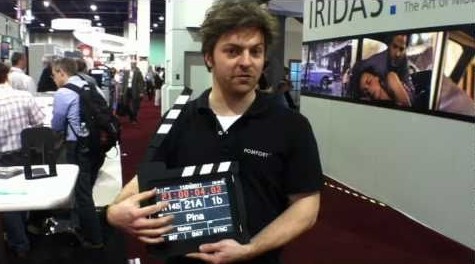 Pomfort tells the iPad Slate to Get Real!

Even though this isn’t officially a real product yet, it’s still officially really awesome! The guys at Pomfort (makers of SilverStack for desktop computers) have created this currently unnamed prototype of a REAL slate that holds an iPad running a slate app! I’m a big fan of using my iPad as a film slate, but there are some drawbacks. The complaint I hear most often is about the sound.  The volume of the clap can be too soft for some shooting environments. Additionally, some people simply don’t trust that the iPad will play the clap sound, and show the clap