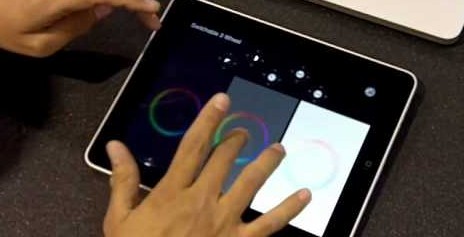 Ever since Stu Maschwitz first published a mock-up of a virtual iPad-based trackball color correction interface, the net has been a buzz.  I’ve received a ton of email, asking when something like this will be available.  Well, it may be sooner than you think! While at NAB, I met with Clinton Torres, a developer who’s nearly finished with Gradiest, his color correction control surface.  He’s designing it for use with Cineform’s First Light.  Once he’s got that up and running, he plans to make his app compatible with other host applications as well (like Apple’s Color). Here’s a sneak peak at his unfinished