Sure, we loves us some Appley goodness, but they’re not the only game in town. If you haven’t already heard, Amazon just refreshed their entire Kindle lineup, adding a very interesting looking android-based color tablet called the Kindle Fire.  It sports a 7″ display, a dual-core processor, and an 8-hour battery life. The best feature, however, is the price.  It lists for $199, a full $300 bucks lower than the Apple iPad.  On the downside, it has no cameras, and lacks 3G support (it’s wifi only).

It’s Wednesday, and you know what that means! It’s time for another Reader Showcase!  Ok… actually, this is the first time we’re doing this, but it sounds like a good idea for a weekly thing, doesn’t it? So, consider this the first of a new weekly feature. A showcase, if you will.  A Wednesday Reader Showcase.  Now, where was I? Check out The Latter, created by Micah Moss (Writer/Director/Producer/Animator) and Aaron Sjogren (Cinematographer/Editor/Soundtrack). Micah shot this entire cool, moody short on his iPad 2.  He also utilized a bunch of iOS apps including SteadyLens, Movie Looks HD, GarageBand, and iMotion HD.

True Hero Studio, the folks behind the Producer & Producer HD apps for iPhone and iPad have recently announced their latest tool for iOS devices, aptly named: Storyboard. The beautifully designed app, due to appear in the App Store any day now [update: it’s been released!], will offer some pretty exciting features: 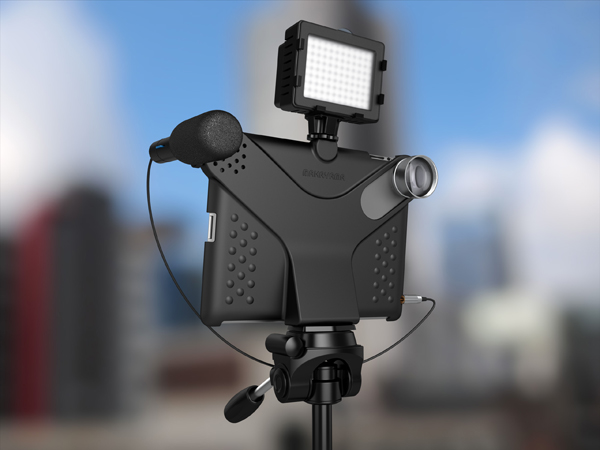 Any filmmaker who owns an iPad 2 has, like myself, probably wanted to use that built in 720p camera more than they have. But the biggest problem with the thing is that it’s incredibly awkward to use. Unlike shooting video with the iPhone 4, the iPad 2 requires use of both hands, doesn’t respond well in low light, and has sub-par audio recording at best. Well, things are about to change.

I’ve seen iPads used for storyboarding, iPads used as slates, but I’ve never seen this before… and it’s awesome! Eric Haase, an extremely talented Cinematographer, needed to capture some intimate interviews for a recent fund-raising project called Imagine 300. Since the project had no budget, he had to think outside of the box. I spoke with Eric to learn how he managed to turn a pair of iPads into a makeshift Interrotron! What’s an Interrotron, you ask? Read on, and prepare to want a second iPad. This is the fund-raising video we’ll be talking about: HHH: Start off by telling

HHH presentation at the DV Expo this Thursday!

The Digital Video Expo is back at the Pasadena Convention Center, and I’ve been asked to give an HHH presentation! I’ll be hitting the stage (a.k.a. slightly raised platform) on Thursday at 2pm, and will be leaving the stage 45 minutes later (or sooner if they get sick of my accidental swearing). As you might expect, I’ll be yapping about the latest production apps & accessories for your iPhone and iPad. If you’re a mobile filmmaker, you’ll totally dig it. But wait, there’s more!

Big Thanks to our Sponsors

Just wanted to take a quick moment to thank the developers that continue to sponsor Hand Held Hollywood. They are absolute rockstars! If you like HHH, and want to support us, than please support our sponsors. They truly keep the hard drives humming. MatchLens is a professional calculator for iPhone that computes equivalent lens focal lengths to produce the same field of view between two cameras with different aperture/sensor sizes. It will do a “Match Lens” calculation between your original camera’s focal length and your current camera’s focal length. Awesome! It’s also worth mentioning that MatchLens was our very first sponsor,